Indyword.com
Words are, of course, the most powerful drug used by mankind. - Rudyard Kipling
Menu

Sense 1
success -- (an event that accomplishes its intended purpose; "let's call heads a success and tails a failure"; "the election was a remarkable success for the Whigs")
=> happening, occurrence, occurrent, natural event -- (an event that happens)

Sense 2
success -- (an attainment that is successful; "his success in the marathon was unexpected"; "his new play was a great success")
=> attainment -- (the act of achieving an aim; "the attainment of independence")


Sense 3
success -- (a state of prosperity or fame; "he is enjoying great success"; "he does not consider wealth synonymous with success")
=> prosperity, successfulness -- (the condition of prospering; having good fortune)

Sense 4
achiever, winner, success, succeeder -- (a person with a record of successes; "his son would never be the achiever that his father was"; "only winners need apply"; "if you want to be a success you have to dress like a success")
=> person, individual, someone, somebody, mortal, soul -- (a human being; "there was too much for one person to do")

Sense 1
success -- (an event that accomplishes its intended purpose; "let's call heads a success and tails a failure"; "the election was a remarkable success for the Whigs")
-> happening, occurrence, occurrent, natural event -- (an event that happens)
=> accompaniment, concomitant, attendant, co-occurrence -- (an event or situation that happens at the same time as or in connection with another)
=> avalanche -- (a sudden appearance of an overwhelming number of things; "the program brought an avalanche of mail")
=> experience -- (an event as apprehended; "a surprising experience"; "that painful experience certainly got our attention")
=> trouble -- (an event causing distress or pain; "what is the trouble?"; "heart trouble")
=> treat -- (an occurrence that causes special pleasure or delight)
=> miracle -- (any amazing or wonderful occurrence)
=> wonder, marvel -- (something that causes feelings of wonder; "the wonders of modern science")
=> thing -- (an event; "a funny thing happened on the way to the...")
=> episode -- (a happening that is distinctive in a series of related events)
=> eventuality, contingency, contingence -- (a possible event or occurrence or result)
=> beginning -- (the event consisting of the start of something; "the beginning of the war")
=> ending, conclusion, finish -- (event whose occurrence ends something; "his death marked the ending of an era"; "when these final episodes are broadcast it will be the finish of the show")
=> one-off -- (a happening that occurs only once and is not repeated)
=> periodic event, recurrent event -- (an event that recurs at intervals)
=> change, alteration, modification -- (an event that occurs when something passes from one state or phase to another; "the change was intended to increase sales"; "this storm is certainly a change for the worse"; "the neighborhood had undergone few modifications since his last visit years ago")
=> error, computer error -- ((computer science) the occurrence of an incorrect result produced by a computer)
=> accident, stroke, fortuity, chance event -- (anything that happens suddenly or by chance without an apparent cause; "winning the lottery was a happy accident"; "the pregnancy was a stroke of bad luck"; "it was due to an accident or fortuity")
=> fire -- (the event of something burning (often destructive); "they lost everything in the fire")
=> incident -- (a single distinct event)
=> discharge -- (the sudden giving off of energy)
=> case, instance, example -- (an occurrence of something; "it was a case of bad judgment"; "another instance occurred yesterday"; "but there is always the famous example of the Smiths")
=> movement, motion -- (a natural event that involves a change in the position or location of something)
=> failure -- (an event that does not accomplish its intended purpose; "the surprise party was a complete failure")
=> success -- (an event that accomplishes its intended purpose; "let's call heads a success and tails a failure"; "the election was a remarkable success for the Whigs")
=> appearance -- (the event of coming into sight)
=> destiny, fate -- (an event (or a course of events) that will inevitably happen in the future)
=> disappearance -- (the event of passing out of sight)
=> disappearance -- (ceasing to exist; "he regretted the disappearance of Greek from school curricula"; "what was responsible for the disappearance of the rainforest?"; "the disappearance of resistance at very low temperatures")
=> contact, impinging, striking -- (the physical coming together of two or more things; "contact with the pier scraped paint from the hull")
=> finish -- (designated event that concludes a contest (especially a race); "excitement grew as the finish neared"; "my horse was several lengths behind at the finish"; "the winner is the team with the most points at the finish")
=> collapse -- (a natural event caused by something suddenly falling down or caving in; "the roof is in danger of collapse"; "the collapse of the old star under its own gravity")
=> interruption, break -- (some abrupt occurrence that interrupts an ongoing activity; "the telephone is an annoying interruption"; "there was a break in the action when a player was hurt")
=> sound -- (the sudden occurrence of an audible event; "the sound awakened them")
=> union -- (the occurrence of a uniting of separate parts; "lightning produced an unusual union of the metals")
=> news event -- (a newsworthy event)
=> flash -- (a sudden intense burst of radiant energy)
=> convergence -- (the occurrence of two or more things coming together)
=> juncture, occasion -- (an event that occurs at a critical time; "at such junctures he always had an impulse to leave"; "it was needed only on special occasions")
=> outburst, burst, flare-up -- (a sudden intense happening; "an outburst of heavy rain"; "a burst of lightning")
=> outbreak, eruption, irruption -- (a sudden violent spontaneous occurrence (usually of some undesirable condition); "the outbreak of hostilities")
=> reverse, reversal, setback, blow, black eye -- (an unfortunate happening that hinders or impedes; something that is thwarting or frustrating)
=> boom, bonanza, gold rush, gravy, godsend, manna from heaven, windfall, bunce -- (a sudden happening that brings good fortune (as a sudden opportunity to make money); "the demand for testing has created a boom for those unregulated laboratories where boxes of specimen jars are processed like an assembly line")
=> crash, collapse -- (a sudden large decline of business or the prices of stocks (especially one that causes additional failures))
=> supervention -- (a following on in addition) 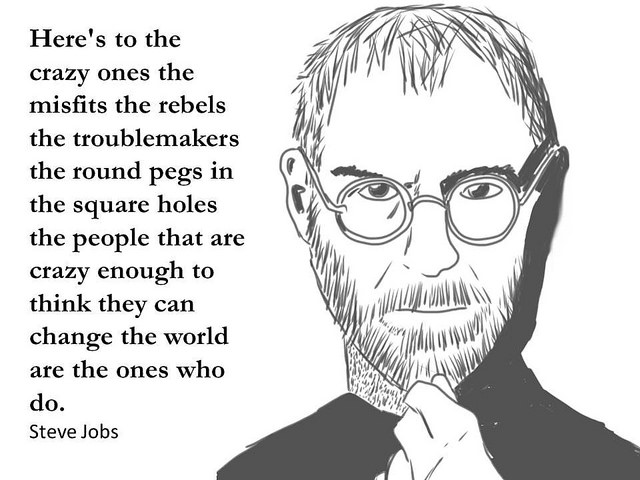 Here's to the crazy ones, the misfits, the rebels, the troublemakers, the round pegs in the square holes... the ones who see things differently -- they're not fond of rules... You can quote them, disagree with them, glorify or vilify them, but the only thing you can't do is ignore them because they change things... they push the human race forward, and while some may see them as the crazy ones, we see genius, because the ones who are crazy enough to think that they can change the world, are the ones who do. Steve Jobs US computer engineer & industrialist (1955 - 2011)

Quote taken from Jobs the movie (www.imdb.com/title/tt2357129/quotes)Image from Deviant Art (catholicguy.deviantart.com/art/Steve-Jobs-from-an-iPad-27...)Created as a representation of how Steve Jobs gained success. With my students we explored examples of success and then considered how people become successful

An other look at success:

People don't realize that life isn't about making as much money as you can, its about how you enjoy the short amount of time you have to live. Because we are all born with nothing and you die with nothing to bring with you to the grave. No matter how rich you are you can not bring all your riches with you when you die. enjoy the short time you have with friends and family and enjoy life as much as you can. Don't waste your whole life working as a slave day in and day out because that's not how to enjoy life. There's way more important things in life than just money. People need to stop thinking as a capitalist because you can not bring your money you so worked hard for with you. You can be a trillion-aire but your empire can't be brought with you when you die. Best way to enjoy life is finding a career with double the pay but be able to work part time and the rest of your time is for enjoying life. Like the saying goes we work to live not live to work as a slave.﻿

If you want to receive more free crossword puzzles, then you could sign up for the Indyword Crossword Puzzle Newsletter, so I can inform you about the latest additions, and also about the free extra puzzles for subscribers to my newsletter only.

When you sign-up for the Indyword Crossword Puzzle Newsletter, you will be able to download a free copy of the "30 Easy Free Printable Crosswords" e-book. You will receive the link in the e-mail which we send you, to thank you, after we receive your confirmation.

Commercial Use of This Content Without Prior Arrangement Is Strictly Prohibited.